How did I get here?

Four years ago I’d never been on a sailboat.  In all honesty I thought sailing was for rich people who wore bad clothing.  My childhood memories of the America’s Cup and  Dennis Conner didn’t help either.  In a few days we are sailing from New Zealand to New Caledonia in our boat.  Most people I know think we’re nuts for doing this but I’m feeling excited and confident.  I can’t wait to go.  This is how I went from knowing nothing about sailing to taking our own boat offshore.

Robin had sailed dinghies as a teenager and he was keen to sail again.  He did the Wellington Learn to Sail course and I hoped he’d get it out of his system.  He didn’t, and instead he talked me into a holiday in the Bay of Islands where there is a fantastic sailing school who also charter boats –  you are taught to sail, then given the boat to sail by yourselves.   Before we went I didn’t expect that after the three instruction days we would actually sail the boat alone, instead I was secretly plotting to get off the boat and to the Duke of Marlborough.  I was still hopeful that if I went along with Robin’s sailing interest he would get over it.
So in October 2014, Ian, our instructor, spent three days taking me from someone who didn’t know how to get onto a boat, to someone who could confidently head off into the bay with only Robin for help – after those three days of instruction we could find our way around the islands, anchor overnight, and avoid the rocks.  Looking back I’m amazed at Ian’s patience.  I didn’t see him wince once.  No eye rolls either.

We went back to Great Escape, the sailing school/charter company, in February 2015 and chartered one of their Raven 31 boats (no instruction this time!) .  Iris loved it, I could see she was totally at home on a boat.  It was a great family time, lots of jumping into the sea.  I was starting to warm up to this.

In January 2016 we bought Sojournie, a Lotus 9.2, in Nelson.  We made lots of mistakes but none of them seemed to end in complete disaster.  We sailed her in the Marlborough Sounds and over the Cook Strait a few times.  I couldn’t believe how deserted a lot of the bays in the sounds were – we were often alone in paradise and I didn’t know why more people aren’t out there on boats.  Money is the obvious issue but Sojournie cost less than a new family-sized car (let’s not discuss the maintenance budget).  I’m good with driving an older car so we can afford a boat but I know we’re lucky and that financially a lot of people can’t afford a boat or a new car. 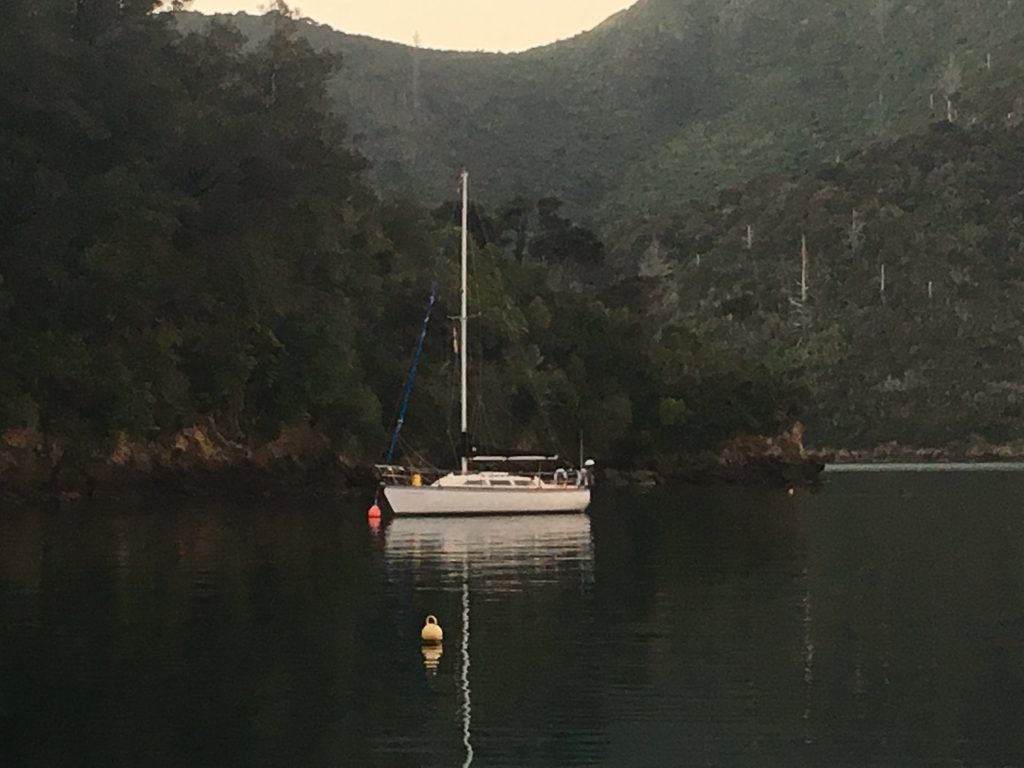 That year we started talking seriously about buying a bigger boat that was capable going offshore.  There were lots of reasons for this – Robin had always had the desire to do it, Iris was a good age for it (not a teenager yet but old enough to be sensible),  I was getting pretty burnt out as a midwife (best job in the world but I found the 24/7 oncall was too hard to sustain).  I like to think Robin got me in a weak moment but in truth I was ready to commit to doing something adventurous.  I liked how mad it seemed.

In November 2016 we sold Sojournie, mortgaged the hell out of the house, and bought Impulse II (we changed the name to Dog Star), another Alan Wright design but this time 42 feet and designed to be capable of sailing an ocean.  It’s a very safe and well built boat but most importantly it has a *hot shower*.

Although we’d been sailing for a few years, before we went offshore we wanted to get more skills, so last year Robin and I did the RYA Coastal Skipper course at Sail Nelson.  Iris came with us and she did her Level 1, Competent Crew.  I was really proud of how well she went on this course and how good our instructor was with a child.  She knows more knots that I do now.  I really benefited from the boat handling part of this course.  Prior to this I’d been struggling with berthing the boat (read: I was terrified of it, avoided doing it at all costs and yelled a lot when doing it) and after this course I became the person who usually berths our boat. I feel quite pleased with myself when I do it,  but I’m still relieved when (if) we don’t hit anything.  It’s very easy for me to to sit back and let Robin do the things that seem out of my comfort zone – some of these skills are intimidating – and it’s been important to me not to do this (too much). 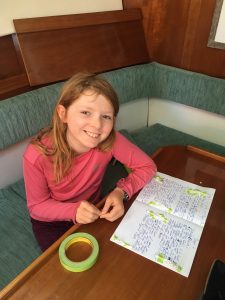 We also wanted some experience sailing offshore.  Kim, a boatbuilder who had surveyed Dog Star before we bought her, was delivering a 54ft Moody to/from Noumea and was generous enough to take us as crew –  Robin went in May, Auckland-Noumea, and I went in September, Noumea-Auckland.  Kim and Craig, the other crew member, have been sailing many years and have both done the Sydney-Hobart race.  I knew I was in good hands and I felt relaxed enough to spend the passage focused on the task at hand (talking Kim into shaving off his moustache).  In all honesty it was an unusually calm passage and may have lulled me into a false sense of security about the ease of offshore passages. I’m still holding onto the idea that getting out of Wellington harbour is supposed to be the hardest part. 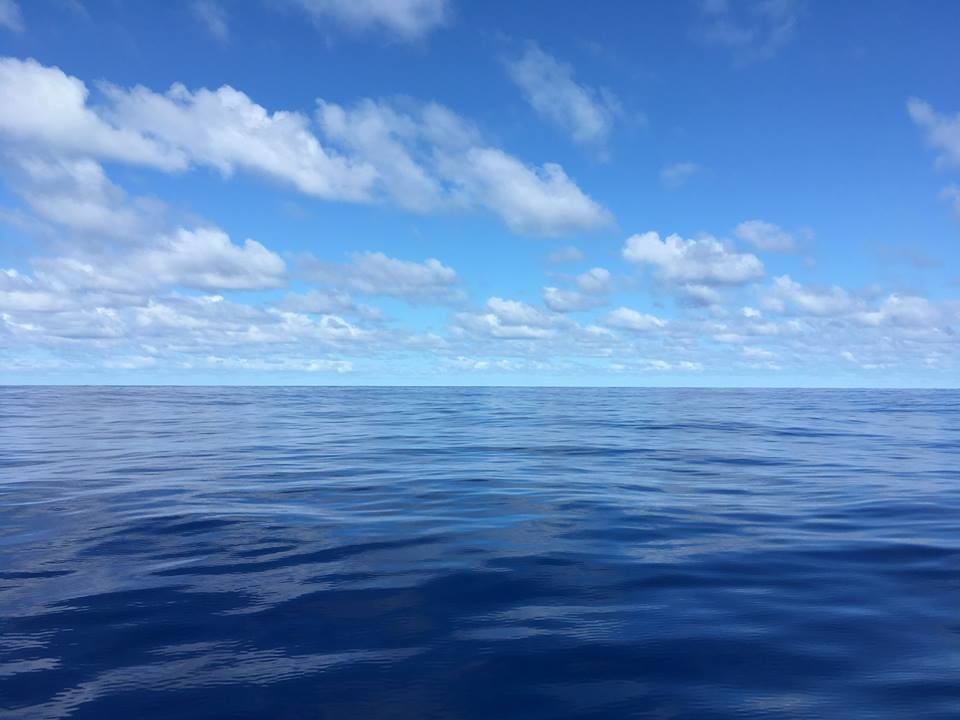 A lot of last year and the first few months of this year were spent working on Dog Star.  We’ve been lucky to have people like Kim, the boatbuilder, and Travis, diesel engineer, to help us, as well as Craig to give us advice and encouragement and generally be enthusiastic about the whole idea of going offshore.  The boat maintenance was another area I found intimidating, and although my knowledge and skill level is nowhere near Robin’s and I don’t know what anything is called, I get into the engine bay and go up the mast. 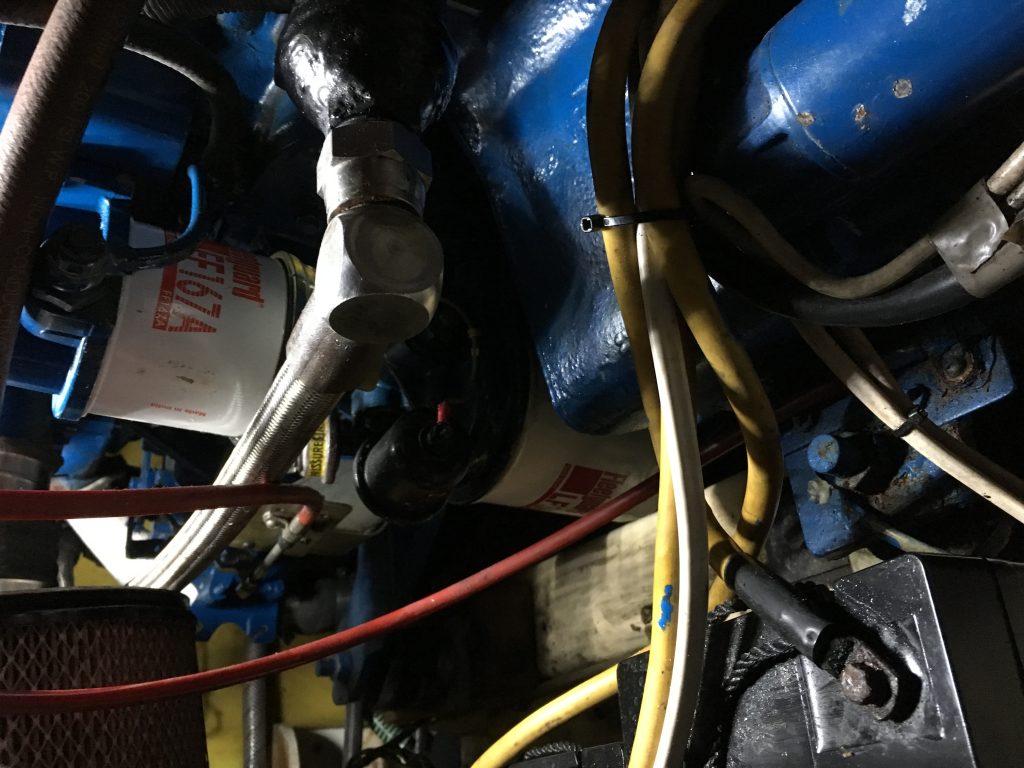 In truth, the hardest part of all this wasn’t learning to sail but figuring out how to leave our life in Carterton – saying goodbye to family and friends, renting out our house, helping at the last birth.  We’re going to get so much good family time together that I think it’s all worth it.  So in less than four years, it’s all happening!

Lisa Blair, A Woman With Confidence